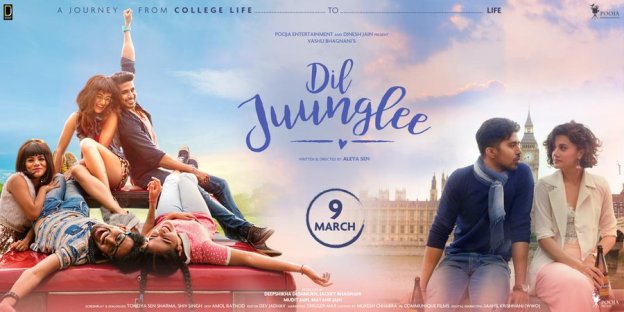 Listen to the T-Series songs: Gaana

Dil Juunglee is a Bollywood rom-com starring Saqib Saleem and Taapsee Pannu in lead roles. The film is directed by Aleya Sen and produced by Jackky Bhagnani and Vashu Bhagnani. The film’s music is by multiple composers — Tanishk Bagchi, Guru Randhawa, Sharib-Toshi and Abhishek Arora. All of these composers have given something listen worthy in the past, and their style of music suits the romcom genre very well, so it’s probably going to be a fun music album.. let’s see!

Now, this album is somehow split between two music labels — T-Series, and the newly-conceived Pooja Music (belonging to Vashu Bhagnani’s Pooja Entertainment) whose digital marketing is being done by Sony Music. The makers probably wanted a remake of ‘Gazab ka Hai Din’ to feature in the album, but since its rights were with T-Series, that song had to be on T-Series as well, right? Because, obviously! And so I guess the Guru Randhawa song was a bonus add-on, like a ‘Buy one get one free’ kind of deal. So yeah, that’s how I guess this album ended up being on two different music labels. Anyway, since that has nothing to do with the music, let’s move on!
The first song on the T-Series part of the album happens to be composed by Guru Randhawa, along with co-composer Rajat Nagpal, the composers of ‘Ban Ja Rani’ (Tumhari Sulu) and ‘Suit Suit’ (Hindi Medium). While his previous songs in Bollywood have been rehashes of his pop singles, Nachle Na is an entirely original song, and no prizes to guess that it is his best and least contrived-sounding song in Bollywood.. (At the moment of writing this review, ‘Kaun Nachdi’ from “Sonu Ke Titu Ki Sweety” hadn’t released, which I now believe to be his best yet.) The beats are groovy, and the electronic loop, though harking back to ‘Aa Toh Sahi’ (Judwaa 2), is quite fresh-sounding. Vocals are good, and I’m surprised Neeti Mohan, of all singers was chosen for this song; she does a brilliant job, and surprises me at the same time. It is the lyrics that fall flat.
Now of course, since Guru Randhawa didn’t remake his own song, the music company had to call in someone who could remake some other song. So we have the more-than-part-time remake artist Tanishk Bagchi presenting Gazab Ka Hai Din, a remake of the song with the same name from ‘Qayamat Se Qayamat Tak’. I must say, he has done a good job providing the padding around the old hook; the mukhda is especially beautiful, but the antara is forgettable. But the addition of the old hook sounds so contrived, the beauty of the song ends there. For me, the mukhda of this song is the only memorable part! I wish he had been allowed to build a new song after this mukhda and not borrow from an old one! Jubin and Prakriti sound functional as always; nothing great in either of their renditions. The strings during the hookline are beautiful, they keep your interest intact through the boring parts of the composition. I also noticed that Tanishk has written the lyrics as close as possible to the old song, thereby keeping a small touch of it alive even in the new composition.
However, Tanishk’s other song Beat Juunglee, which features in the Pooja Music part of the album, is an amazing and instantly catchy one, and though he uses the iconic “Yaahooo!” from Shammi Kapoor’s ‘Chahe Koi Mujhe Junglee Kahe’ (Junglee), I’m happy that he hasn’t been made to recreate that number, because his original composition in this song is so insanely catchy!! Armaan Malik was the best choice for this, and the results show brilliantly. Prakriti Kakar gets not much to do, but does well in her one or two lines. Most insane though, is the programming by Tanishk, which has been getting better day by day. The electronic loop which starts the song is crazy and so are the percussions and horns throughout the song. Vayu’s lyrics are always entertaining and they are just that here as well. It just goes to show you how well Tanishk can actually compose when given the freedom. (As if last year’s ‘Shubh Mangal Saavdhan’ wasn’t proof enough!)
Sorry for rambling about that song, but the next song, by Sharib-Toshi, Bandeya, deserves just as much praise. Now this composer duo hasn’t been in the picture for a long time. And by in the picture I mean the way Tanishk is constantly in the picture, every month. The last song they composed was in the recently released “Fukrey Returns”, and now they return with another Punjabi song, this time a sad song sung by Arijit Singh. The composition is soulful, the arrangements heart-warming and the lyrics by Devendra Kafir amazing. The composition has the feel of Anu Malik’s ‘Mere Humsafar’ (Refugee) but the similarity is only in the first line of the hook. Arijit himself is quite at ease with this kind of a song, and is his usual soulful best.
The second best song of the album, after ‘Beat Juunglee’, has to be Abhishek Arora’s Dil Jaane Na, an amazing fusion track that starts off as a soft romantic number, but segues into a pumped-up electronic number with a groovy beat to it. Seasoned voices like Mohit Chauhan and Neeti Mohan are the perfect choice for the song, and they deliver well. I love the way composer Abhishek Arora makes the seamless transition from the soft portions of the song to the upbeat ones, and not just once but numerous times throughout the song. All in all, this song is a treat for people who like light and fluffy music!

The album was “Juunglee” after all, but I loved the Pooja Music part of it much, much, much more than the two songs on the T-Series label. Some things are just meant to be less “Juunglee” and hence less likeable than others!

Which is your favourite song from Dil Juunglee? Please vote for it below! Thanks! 🙂