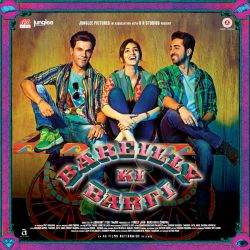 Bareilly Ki Barfi is an upcoming Bollywood rom-com, starring Kriti Sanon, Ayushmann Khurrana, and Rajkummar Rao in lead roles. The film is directed by ‘Nil Battey Sannata’ fame Ashwiny Iyer Tiwari, and produced by Nitesh Tiwari and Shreyas Jain. The movie revolves around the Mishra family, who are in search for a suitable groom for their daughter, played by Sanon. The complexities and pressure of getting married is too much for Bitti, Sanon’s character, and she decides to run away. On the run, she finds a book, ‘Bareilly Ki Barfi’ at the train station, and picks it up, only to realise that the female protagonist thinks a lot like her! Thus she embarks on a quest to look for this someone who thinks so much like her. The story seems very content-driven, but that’s not to stop it from having some good music; in fact, most content-driven films have better music than others! Ashwiny Iyer Tiwari’s first film, ‘Nil Battey Sannata’, had an awesome album completely composed by a newcomer duo, Rohan-Vinayak. This time, the makers go for the multicomposer route. Tanishk Bagchi, Tanishk-Vayu, Arko Pravo Mukherjee, Samira Koppikar and Sameer Uddin are composing the music for this film. As I am expecting an overall good album, and since every name is a known name (even Sameer Uddin, who is the one who had done those remixes in ‘Bluffmaster’ long ago) I don’t think I need to say what I expect from each of them individually! So let’s help ourselves to this ‘Barfi’!

An aptly U.P. flavoured start to the album, the first song is a fun and upbeat dance number, along the lines of ‘Badrinath Ki Dulhania’s title song. Coincidentally, the man behind it is Tanishk, the composer of that song. The composition is very fun and enjoyable, and the composer has kept it relevantly short; such songs are least enjoyable if they ramble on for four minutes and longer. The shortness gives it a crisp feel, and leaves you wanting more. There is one mukhda and one antara, both composed entertainingly. The arrangements too resemble those of ‘Badrinath Ki Dulhania’ title song, with the dholaks (Naveen Sharma), harmoniums and bulbultarang (Pradip Pandit) and quirky digital beats. The star music is amazing, especially that sarangi bit by Sangeet, that is so easy to miss! Tanishk adds very fun sound effects like that rap by Pravesh Mallick, then a random but funny “Myujik” that just plays anytime. His digital instrumentation is fun as well. The song has been sung by three singers and the rapper. The rapper, as stated before, brings out the U.P. flavour very well, and begins on a promising note. Dev Negi is his usual fun self, while Pawni and Shraddha, the two female vocalists, with two lines each, make a difference even with the little scope! Shabbir Ahmed’s lyrics are fun too! A fun dance number that strives to be simple but sweet!

Arko steps forth to present his song, and as is the requisite whenever Arko composes for a multicomposer album nowadays, he gets to do the romantic song of the album. Well, since he is so good at making these, it seems logical. This song here, is yet another example of his romantic song composing skills. The composition is charming, but there is one small drawback, and that is that it takes a long time to grow. It consists of many twists and turns, and isn’t instantly hooking like most of his other songs. The second antara is particularly beautiful. The hookline manages to get the audience charmed. The lyrics though, are beautiful, and are another instance of how beautiful Arko himself writes!! The song appears in three versions, though, and one does feel that it is one too many. Arko doesn’t sing this song as well as he sang ‘Kaari Kaari’ (Dobaara), ‘Dariya’ (Baar Baar Dekho) or ‘Saathi Rey’ (Kapoor & Sons), and thus, his version comes across as slightly boring. The arrangements in this version also resemble ‘Tere Sang Yaara’ (Rustom) with those extra sugary Duff rhythms and synthesizer tune (Keys by Aditya Dev). It reduces the likability a bit. Ayushmann increases the ear-friendliness of the song with his trademark charming voice, and renders it with ease. His style of rounding the vowels makes the song sound so much like he has composed it himself. The variations he takes on many notes, which Arko had not, makes the song sound more layered. The arrangements too, get more Ayushmann-ish, with acoustic guitars (Krishna Pradhan), but the Arko-ness is retained with the amazing piano notes. Thankfully, the Duff rhythms are done away with. The last version happens to be a female version; a version I personally feel was least required. So Zee Music releases videos of singers singing covers of hit songs, and I almost know that this version will be used as that. Not to take it away from Sumedha though; she sings beautifully! Arko arranges this one with a soothing flute, but nothing else really stands out! A romantic song that features so many times, we have no choice but to love it!

The next song has Tanishk coming back together with his partner with which he debuted, Vayu. They keep coming back together occasionally, and it is quite fun. Though their last song ‘Beat It Bijuriya’ could’ve been better, this one is a real treat. The composition is very simple, and if it were not for the amazingly quirky beats and arrangements, the song would not have sounded half as good. Of course, a very templated dhol rhythm accompanies the song, but a very quirky digital sound also comes along with that and everything sounds so innovative. The interlude is amazing, with the dhols and shehnaai. Rock guitars are really electrifying in the antara. The hookline, the way it is sung, is so cool. The pause between ‘Twist’ and ‘Kamariya’ really makes the difference. Im probably hearing Harshdeep Kaur in this zany avatar for the first time. I mean, she has sung upbeat numbers, but not so crazily funny! Tanishk-Vayu’s lyrics are a clever mix of Bhojpuri and Hindi and English. A song that calls for loud whistles and cheers in the theatre! U.P. folk meets techno music!

Samira Koppikar, who really pleasantly surprised me with her song in ‘Dobaara’ earlier this year, jumps onto the album next, with a melancholic song that is sung by –obviously — Arijit! The song is good, I can’t take that away from it. But somewhere the composition evokes so many memories of previous Arijit songs that were composed on the same rock lounge-ish template. It actually sounds like a Pritam song when that beautiful backing chorus comes in, and that’s probably the best effect of the song. The composition too, is beautiful, and hits the heart straight. I just don’t think I would listen to it a lot. The vocals are, obviously spot-on. What can be expected when it is Arijit? Fortunately, there’s another version, possibly for the music lovers. Samira sings this one, and it starts with a heavenly chorus by her. She sings in beautifully, and is first of all supported by a wonderfully soothing folksy string instrument, evoking memories of ‘Sahiba’ (Phillauri). Later that Punjabi feel is increased, when a nice dholak-led rhythm sets in. This version is definitely better than Arijit’s. The lyrics by Puneet Sharma are aptly romantic and melancholic at the same time. The word ‘bairaag‘ is a word I don’t think I’ve heard in a Bollywood song after ‘Laal Ishq’ (Ram-Leela)! Beautiful song, but might not stay with me for long.

A relatively newer addition to the album (as the composer Sameer Uddin wasn’t credited in the trailer or first poster of the film), this one is a funky “gangsta” song, probably made for Rajkummar’s character in the movie. The U.P. vagabond and rowdy feel is brought out with entertaining lyrics rendered with spunk by Abhishek Nailwal and the composer himself. The gangster feels are brought out by the rap, the techno beats and the overbearing sinister tone. The composition is catchy, but again, not a very lasting tune. The arrangements are more of what the song might be remembered for, if at all. The vocals are fine, and obviously the male singers have done an amazing job, or else, it wouldn’t have sounded so much like a gangster song full of attitude. Neha Bhasin is sidelined unfortunately, and reminds me of Ambili’s portions in ‘Hum Hain Bank Chor’ (Bank Chor). Entertaining, but not everlasting.

Bareilly Ki Barfi is a relatively good multicomposer album. I think these days, the quality of multicomposer albums is definitely increasing, because makers now know the formula for it. You obviously need two upbeat numbers to increase the album’s hit status, and of course, a romantic song, a sad song (preferably by Arijit) and then a couple of versions. Zee seems to have mastered the formula, and they produce another album like ‘Behen Hogi Teri’, which is a mix of styles from different composers, yet comes together as a united album. With a mixed variety of songs, these multiple composers have come up with a nice, khatti-meethi Barfi!

Which is your favourite song from Bareilly Ki Barfi? Please vote for it below! Thanks! 🙂