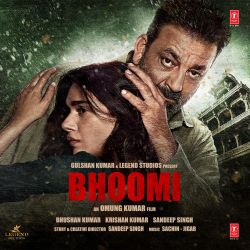 Bhoomi is an upcoming Bollywood action thriller starring Sanjay Dutt, Aditi Rao Hydari and Sidhant Gupta in lead roles. The film has been directed by ‘Mary Kom’ and ‘Sarbjit’ fame Omung Kumar, and produced by Bhushan Kumar, Krishan Kumar and Sandeep Singh. The film is a revenge saga revolving around a father trying to avenge his daughter, who is a rape victim. Now, this filmmaker Omung Kumar, has been known for making loud and sobby dramatic films, but also, both of his previous films have had amazing music albums as well, featuring in the Music Mastani’s Top 20 Albums of the respective years they released in. While ‘Mary Kom’ featured music by newcomers Shashi-Shivamm, and ‘Sarbjit’ featured a nice mix of T-Series-affiliated artists (Amaal Mallik, Tanishk Bagchi, Jeet Gannguli), and newcomers Shail-Pritesh, this time Omung raises the bar by roping in highly busy composers Sachin-Jigar. Now this is probably the first time I remember seeing the duo compose for a drama like this, so it’ll be something new for them and for us. But expectations are still sky high because of Omung! So let’s see how far above the bhoomi (ground) Sachin-Jigar’s music flies!

Sachin-Jigar’s fifth album of the year starts off with a song I can’t believe they have made!! The song is a club song with a composition that I would expect from someone like Badshah or Yo Yo Honey Singh, and not Sachin-Jigar! The composition is very weird, and not in the good way. It is basically just a typical item song composition, and coming from Sachin-Jigar, that is quite shocking. The male portions especially, are very disappointing. Those are actually the parts that could’ve been the best. Also, the antara is quite similar to their own “Teri Mahima Aprampaar” (Entertainment). The hookline is just Badshah belching out the words in an expressionless tone. Here, it is evident the composers were trying to experiment, just to make the song sound a bit better, but sadly, they couldn’t make those experiments work. For example, the flute and dhols arrangement was clearly done to increase the quirkiness of the song, but it backfires, sadly. The beats too, aren’t addictive or anything — it is just a straightforward song to listen to and forget. The vocals by Neha Kakkar are very disappointing after that amazing rendition of hers in ‘Ghungta’ (Babumoshai Bandookbaaz)! Here she doesn’t even sound half as energetic as she did there! Benny Dayal and Brijesh Shandilya (and of course Badshah) are used very less, and their portions are just repeated over and over. Good, because those parts are very irritating. Also, the ‘Hicky hicky’ sung by Neha is kind of irritating too! The lyrics by Priya Saraiya are the usual fare we get to hear in such songs, and nothing really makes sense. A song that must be a mistake!!

Next up, the composers present a romantic song, very saccharine-sweet, and following a Sufi template to the tee. Again, it is shocking that Sachin-Jigar’s music gets so predictable, but let’s not complain just yet. The composition here is very beautiful, and doesn’t take time to like. The mukhda and antara are especially very beautiful. It is the hook line “tere mere pyaar nu“, that is very predictable and sounds out of place, in an otherwise beautiful song. I can’t remember which, but it sounds an awful lot like a very famous 90s song too. The presence of Rahat almost impeded me from liking the song a lot. His voice has been making songs heavy and inaccessible these days (Like it did for ‘Mere Rashke Qamar’ from ‘Baadshaho’), but thankfully, Sachin-Jigar have employed his voice prudently, and not overdone the high pitch or the aalaaps, and it comes out very beautiful. The “Rab Varga” loop gives the song a very unconventionally abrupt start, and it’s one of the best effects of the song. The arrangements by the duo are the trademark Sufi dholaks and tablas, but because of the composition, you bear with it. Also, a wonderful sarangi keeps you engaged throughout the song! The major part of the song also has acoustic guitars, making it a kind of fusion between Sufi and acoustic guitars. Priya Saraiya’s lyrics are very cute, and very simple-sweet. A rare song by Rahat Fateh Ali Khan that will be known for simplicity! I wish there was some innovation though, as it has turned out very predictable!

3. Will You Marry Me

After two slightly disappointing songs, Sachin-Jigar get to make a wedding song for the film. Now, this song seems to be one of those disappointing songs which grow with time, because that’s what happened with me. I found it a bit weird at first, but in the successive listens, I started to like it bit by bit. Now this is purely subjective, but I still think Sachin-Jigar didn’t try to make this song (or any song from this film) complicated and layered, and that’s why this is happening. The songs are straightforward, something we hardly get from Sachin-Jigar, and that’s why we might be disappointed at first. Anyway, the composition is a peppy wedding number, complete with Punjabi phrases and effective Indian wedding arrangements. The hookline seems very cheesy at first, but becomes catchy later on. The beginning is quite entertaining, with those dialogues, and after that, Jonita’s weird programmed voice singing something gibberish, I believe. That is one of the best parts of the song. The female chorus too, is very entertaining, and the word “ponga pandit” specifically caught my interest. Lyricist Anvita Dutt has utilised it so nicely. As the hookline gets closer though, the song increases its heard-before-ness, and it becomes an ordinary wedding song by the time the hookline arrives, though it is catchy. The antara is no better. Vocals are entertaining, especially Jonita’s, and the female backing vocalists. Divya gets the same part to sing twice, and he sounds good too, but it is the composition of his parts that sounds too flat. Arrangements consist of digital beats accompanied by Indian wedding instruments like the shehnaai (wonderful interlude on that!), dhols etc. Anvita Dutt’s lyrics are very innovative at parts and very ordinary at parts. A confusing song! You don’t know whether you like it or not!

Now comes what I’ve been expecting from Sachin-Jigar ever since ‘Meri Pyaari Bindu’ released and I loved all the songs. After that, frankly, I didn’t love any Sachin-Jigar song as much as I loved the song ‘Maana Ke Hum Yaar Nahin’, in any of their albums that released. But now, in ‘Bhoomi’, they come up with a deserving opponent for ‘Maana Ke Hum…’ with this song, another ghazal, and in my opinion, even better than ‘Maana Ke Hum…’ itself. I’ll explain why. The composition is genuinely ghazal-like, as in an actual, authentic ghazal! Though that song was also a ghazal, it did have minor Bollywood-ish touches. But in this song, Sachin-Jigar do not bow down to peer pressure in order to make a Bollywood-friendly song. The song still does carry many nuances of Sanjay Leela Bhansali’s style of composition though. I sincerely hope SLB catches this song and ropes Sachin-Jigar in for his next project! The antara is one of the most beautiful compositions I’ve heard in a while. The arrangements too, are amazing, with soothing tablas, divine manjeeras, beautiful Guitars, and scintillating strings that provide an atmosphere of love and divinity. The water drop sounds, so characteristic of SLB, sound beautiful. Sachin Sanghvi says this is his first solo song in Bollywood (He also sang a duet with Shreya Ghoshal in ‘Jayantabhai Ki Luv Story’ before this), and he does his solo debut in a smashing manner! His voice has that amazing metallic touch, which people might mistake for programming, but it is his raw voice! Priya Saraiya’s lyrics are yet again, one of the most brilliant she’s written this year. A lovely number that is surely going to stay with me for a long time!!

The pathos enters now, as it always does. Of course, because this is an Omung Kumar film after all. There has to be an overtly dramatic sad song. And that happens to be this song. Now, the composition is really good, if I have to judge as per it’s genre. But as an individual song, this doesn’t take me anywhere. After the magic that the former song had me possessed with, this song falls flat! The duo try to lift it up with an intriguing and mysterious arrangement (this guitar riffs do the trick), but how much can a song be able to be saved by good arrangements if the composition isn’t appealing? Sukhwinder adds to the tedium, with his heavy voice, and it sounds very uncomfortable. Even though the composition is so poignant, it all sounds fake due to the overcooked nature of the music and vocals. The hookline itself too, is very tedious. It sounds like something that should have released around 2008. Sadly, this one isn’t memorable at all!

To wrap up the album, Sachin-Jigar present a devotional song. Now Ganeshotsav has ended, and Navratri is about to start, and with the film opening just one day after Navratri starts, it seems an apt decision to include a song entitled ‘Jai Mata Di’ in the album. Now, the song is primarily a very dramatic devotional song again, to make it fit with Omung Kumar standards of drama. However, it fares a bit better than that one, thanks to the divine touch. The composition is amazing, and Sachin-Jigar mould themselves into a very trademark Ajay-Atul mode to compose this one. Actually, if Ajay-Atul had composed for the ‘Sarkar’ series, and the chants would’ve been ‘Jai Mata Di’ instead of ‘Govinda’, then this would have been the perfect background score for the ‘Sarkar’ franchise. To add to the Ajay-Atul feel, Sachin-Jigar even rope in Ajay as the lead vocalist. As always, he aces the song. Sanjay Dutt starts the song with a mantra, bt his interventions throughout the actual song when he sings “Jai Maa Jai Maa’, sound better. The arrangements are good, and Especially the strings are amazing. Other sounds like the tabla, and the pathos-filled composition make it sound like yet another SLB song, a la ‘Gajanana’ (Bajirao Mastani), and ‘Dola Re Dola’ (Devdas). This song isn’t something to enjoy with your earphones, but something to experience in theatres!

Bhoomi is a great example of an album composed by talented composers, but which suffers due to their inexperience in the genre of drama. Sachin-Jigar have composed for drama films very less; they usually go for rom-coms or musicals, but in this one, their discomfort is visible while composing for such a film. They still do try to add their own elements into the album, like the quirkiness of ‘Will You Marry Me’, which diffuses into thin air later on in the song. The best song in definitely ‘Kho Diya’, which I’m sure you will agree with, and so might they themselves. Anyway, it is one of those rare occasions where Sachin-Jigar disappoint, and it will surely pass!

Which is your favourite song from Bhoomi? Please vote for it below! Thanks!! 🙂