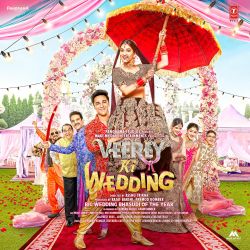 Veerey Ki Wedding is a Bollywood comedy film starring Pulkit Samrat, Kriti Kharbanda and Jimmy Shergill. The film is directed by Asshu Trikha and produced by Rajat Bakshi and Parmod Gomber. The film’s music album contains music by Farzan Faaiz, Jaidev Kumar, Meet Bros and Ashok Punjabi. Let’s dive right in, I have no expectations as such from this album..!

So the album doesn’t start out as bad as expected; Mind Blowing, though suffering from an extreme case of Mika-ate-the-words-again syndrome, has an enjoyable South-flavoured rhythm by (newcomer?) Farzan Faaiz, with the ‘Chinta Ta Chita’ (Rowdy Rathore) rhythm being used for propelling the song further into the masses’ hearts. The backing chorus sounds so bad, it’s actually good. The typical horns are there too, so everything you need in a generic kuthu song is there — I just wish the lyrics (by two people.. quite talented, it seems, writing lines like “Maana Milky Milky Badi Hai Teri Kalaai“.) and singer were different!
Farzan’s other song Na Kasoor is a staid melody that isn’t bad, but isn’t good either. It’s more like an “Oh, it’s over already? When did it start?” song. While he borrowed the rhythm from “‘Chinta Ta Chita” for his first song, Farzan tries to make this one sound like “Jashn-E-Bahaara” (Jodhaa Akbar), and to that effect even ropes in Javed Ali for the vocals, and jingles bells in the background. Sadly, it turns out to be a disaster because he insists on including sounds like breaking of glass and other “modern” sounds. It’s just a mishmash of sounds that don’t go together. It’s like eating fish with tomato ketchup. (No offence if you do.)
Jaidev Kumar’s Hatt Ja Tau, a convenient remake of the Haryanvi folk song of the same name, is much more enjoyable, mostly due to Sunidhi’s powerhouse vocals. The musical arrangements sound fresh here, but Devendra Kafir writes lyrics that would make you blush. The composition too, being so happy-go-lucky, helps to make you ignore the lyrics, and Jaidev’s cheerful arrangements are fun too.
Another bad song on the album is given by Meet Bros. Talli Tonight, from the name itself you can tell that the song is doomed. Somebody called Deep Money (forgive me if he’s some sensation) sings the song very uniterestedly, while Neha Kakkar sings in a manner I’ve never heard her sing in — utterly bored and sleepy! The wannabe beats do not make you want to get up and groove, rather they would make you skip the song. Meet Bros’ rap is just cringeworthy. Or was that Deep Money?
The best song of the album, only because the others are so cringeworthy, is Ashok Punjabi’s Veerey Ki Wedding, which is essentially a 90s wedding song, that was destined to release in 2018. Navraj Hans provides the necessary spunk to the song, and the arrangements (dholaks, harmonium, tumbi) help make it fun and enjoyable. The ladies’ chorus led by Saloni Thakkar is also enjoyable. The backing vocalists though, sing so high pitched, as if they’re in some 90s song.

Some composers picked up from the middle of nowhere make this a wedding you should be dreading!