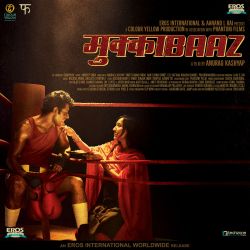 Listen to the album: Saavn

Mukkabaaz is an upcoming sports-cum-politics drama directed by Anurag Kashyap, starring Vineet Kumar Singh and Zoya Hussain in lead roles, and Ravi Kishen and Jimmy Shergill in supporting roles. The film’s music has been composed by last year’s debutante Rachita Arora, the composer of ‘Newton’, and features two guest compositions by Nucleya and lead actor Vineet Kumar Singh. I do expect something in the zone of Sneha Khanwalkar in Rachita’s music, because I don’t see why Kashyap would sign her if she didn’t! After musical successes like ‘Gangs Of Wasseypur’ and ‘Bombay Velvet’, let’s see what director Anurag Kashyap has in store for us, with this music album!

The album starts off with a very energising track, Paintra from the DJ Nucleya. Unlike his previous stint in Bollywood, ‘Let’s Nacho’ (Kapoor & Sons), this one actually has some use in the film’s narrative, and it does its job of promoting the film very well. The makers have added another version of it called Paintra (Extended Version), but it only has some hard-hitting dialogues by Jimmy Shergill, who plays the antagonist. The song itself is the typical Nucleya mishmash of interesting digital sounds, with a queer but catchy South Indian vibe to it. The Rap by DIVINE is the highlight of the song, and after a long time we get a meaningful rap in Bollywood, thanks to lyricist and lead actor Vineet Kumar Singh. Vineet himself has composed a song in the album, Adhura Main, a song trying to ape ‘Humni Ke Chhodi Ke’ (Gangs Of Wasseypur) so much so that it has the same singer, grown up now, and the same simplistic harmonium arrangement. Sadly, it doesn’t work — Vineet’s lyrics are the only good thing. The voice is harsh to the ears, and the high notes make you cringe.
The major chunk of the album, which is five songs, belongs to Rachita Arora, the talented young lady who scored for ‘Newton’ last year. Her first song, and my favourite of the album, is Mushkil Hai Apna Meil Priye, a folksy number enriched by Brijesh Shandilya’s vibrant vocals, and Dr. Sunil Jog’s amazing lyrics on class differences between lovers. Rachita arranges it fabulously too, with folksy vibes in the initial parts, that break out into an enjoyable up tempo brass band towards the end. In a similar zone is Bahut Hua Samman, a protest song against politicians, of course. The percussions here are spot-on, and though the composition slackens in between, the amazing vocals by Swaroop Khan keep you hooked. I particularly enjoyed the parts where the sound of the vocalist is muffled; it gives a fun effect. Bohot Dukha Mann is the last of the songs we can hear in any other non-Anurag Kashyap album. It is a classical-based song, quite in the Rahman zone, because of Raag Puriya-Dhanashree, Rahman’s favourite in the 90s. The song itself doesn’t hold together for long, and disintegrates completely after a second antara starts. Rachita Arora and Dev Arijit behind the mic too, fail to pique interest.
The remaining two songs fall into a typical ‘can’t-understand-what’s-happening’ Anurag Kashyap zone. Not that they aren’t enjoyable. Chhipkali is a laugh fest; the first time I heard it, I laughed out loud, and there haven’t been many songs that have made me do that before! The laughing is definitely because of Vijay’s interactive singing, Rachita’s amazing pseudo-retro arrangements and slow tempo, and Hussain Haidry’s lyrics that anyone living in a house infested with lizards would relate to. The ‘Gandhi ke photo ke peechhe‘ gag is hilarious. Saade Teen Baje, on the other hand, is a Bhojpuri-style ladies sangeet number that makes you want to understand why they’re having such a jolly time, if only the lyrics were audible amidst the giggling and the lead vocalist’s accent. Rachita’s typical wedding arrangements are great though.

Not the very best music to come out of an Anurag Kashyap film, but the single by Nucleya is sure to hit the radio. A sizeable punch, given that the composers are new talents!

What is your favourite song from Mukkabaaz? Please vote for it below! Thanks! 🙂