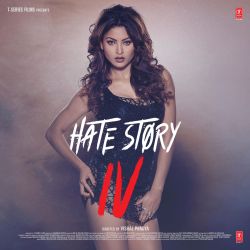 Hate Story IV Is a Bollywood thriller (cough cough, ahem ahem) starring Urvashi Rautela, Karan Wahi, Vivan Bhatena and Ihana Dhillon, directed by Vishaal Pandya, and produced by Bhushan Kumar, Krishan Kumar and Vivek Bhatnagar. The film has music by Tanishk Bagchi, Arko Pravo Mukherjee, Mithoon, Tony Kakkar and Baman-Chand. Now all of these composers have been working with T-Series for quite some time, but that doesn’t mean I expect too much from the album! The reason being that the ‘Hate Story’ franchise has never been strong on music, no matter how popular it has been.

Tanishk Bagchi’s remake spree which seems to be inexorable, continues just as strongly as it had started off. I can’t even remember when it started. ‘Humma’? ‘Tamma’? Who knows. But now he gets to Himesh Reshammiya’s bank of songs. The producers browse for a moment through Himesh’s repertoire, and finally pick out two of his songs, for Tanishk to recreate. Tanishk, reluctantly, complies. One of the recreations has backfired terribly — Aashiq Banaya Aapne ends up being a lazy club number, in which Neha Kakkar lazes around as if she’s reciting a poem instead of singing a song. Tanishk’s too loud programming stuns the ears, and the way he uses Himesh’s voice is terrible. Tanishk never does a remake without having Tapas Roy play the hook of the song on a mandolin or some other ethnic string instrument, and he does that here too, just increasing the heard-before-ness of the song. Manoj Muntashir’s lyrics are almost the only worthwhile stuff in the song. The second one, Naam Hai Mera, at least has good vocals and music, and if you forget that the essence and beauty of the original song, which was soulful, has been demolished, you will like it. Neeti’s powerful voice luckily propels this one to where it is, and Tanishk’s EDM is refreshing. It is the lyrics here, that spoil the song.
Moving on to the original numbers, Arko’s Boond Boond is the best of the lot, with a nice Latino vibe to it, but it is not all that innovative either. It sounds like Arko was trying to recreate the type of songs Bollywood made in 2006-2008, when we were obsessed with Latin American music. Jubin’s voice doesn’t suit the song a lot, but Neeti saves the day (again), while the lyricists Manoj Muntashir and Sanjay Gupta (the filmmaker??) have nothing much to do except search through old Bollywood songs and put together all the clichéd phrases they could find.
Mithoon’s first song of the year is highly disappointing — Tum Mere Ho tries to be a ‘Sanam Re’-esque love song, but ends up being sleazy and lazy. The vocalists Jubin and Amrita Singh only increase the laziness with their lazy voices, making me too lazy to write a review for the song. The only good thing here, are the percussions in the interlude. That’s a nice touch.
If that song was lazy, wait till you hear Mohabbat Nasha Hai, a typical Tony Kakkar cry-fest. But though his previous cry fests like ‘Khuda Bhi’ (Ek Paheli Leela) and ‘Mile Ho Tum Humko’ (Fever) have been quite good, this one, being a mishmash of all of them, and with the same boring beats, is just plain boring. In one of the versions, I can at least listen to Neha Kakkar when her part comes (she sings better here than she sang ‘Aashiq Banaya Aapne’), but in the Male Version I don’t even have that liberty. Oh well.
The other best song of the album, at par with Arko’s song, happens to be Baman-Chand’s Bhatt-ish melody Badnaamiyan. The Male Version by Armaan Malik fares much better, and that’s the one that is the best of the album. Armaan’s voice suits the romantic composition, and Baman-Chand’s arrangements are great, though heard before, especially the electronic tabla. Sukriti Kakar doesn’t do too well in the Female Version, and even the arrangements don’t support her, being the usual boring arrangements used for such songs.

With the fourth instalment in this series (fifth if you count ‘Wajah Tum Ho’), it is evident that T-Series, who seem to have been making the films only for the music, might stop making the films soon, because the music is certainly going down…!

Which is your favourite song from Hate Story IV? Please vote for it below! Thanks!