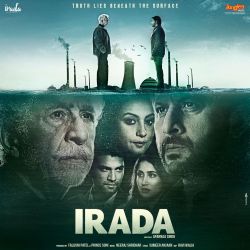 Irada is a Bollywood thriller film, starring Naseeruddin Shah, Arshad Warsi, Sharad Kelkar, Sagarika Ghatge and Divya Dutta. The film is directed by Aparnaa Singh, and produced by Falguni Patel and Prince Soni. The movie is an eco-thriller about a mysterious bomb-blast at a factory, and the repercussions that follow. The movie having released already, and I being as lazy and late as I can to write the review for some reason, I should just hurry and get on with it. So the music has been composed by someone who we have been hearing behind the mic for years, (and also somebody who hasn’t sung a “good” song for quite a long time) Neeraj Shridhar. The singer-turned-composer isn’t composing something for the first time in his life; I believe he debuted with one song in Akshay Kumar’s ‘8×10 Tasveer’. Neeraj has composed four songs for the thriller film, and hopefully they bring the thriller touch to the film very nicely. Also expecting him to have sung a song. That being said, let’s dive on into the soundtrack of ‘Irada’!

The first track on the album starts off the album very romantically, with a charismatic romantic song, high on Rajasthani folk elements and a very scinitllating tune. The composition by Neeraj Shridhar really took me by surprise. But then again, he coming from a pop background, such a composition could be expected from him also, as pop is a genre where you are free from the bindings of the script and whatnot. The song starts off with a wonderful folksy introductory couplet, sung by an uncredited backing vocalist, and she sounds great trying to emulate Rajasthan’s folk vocalists. As soon as the song starts, and right away starts with the hookline, you can’t help but be reminded of Anu Malik’s ‘Hamein Jab Se Mohabbat Ho Gayi Hai’ (Border; 1997), and coincidentally, that song too had a heavy use of the word “Maahi”. 😀 Here, Neeraj has beautifully made a hookline from that word, but it also sounds quite ordinary. One can’t help but keep waiting for something path breaking to arrive, but it doesn’t. Both the antaras have a nice tune too, a mélange of high and low notes. There is a kind of conclusion to the song after the second antara ends, and one just feels that it was completely unnecessary. It stretches for almost one minute, in a Qawwali style, which could have instead taken place in one of the interludes. But it looks like since Shabab had hardly anything to do for the first four minutes of the song, one minute was allotted solely to him at the end. Neeraj’s arrangements are fascinating. Rajasthani folk instruments find their way into his song, the sarangi and other strings being the most prominent. The beats for the rest of the song are digital, and I also feel that could’ve been replaced by traditional dholak beats. And then during that one minute of Qawwali, Neeraj adds the necessary tablas and harmoniums. The flute that starts the song is just fascinating. Harshdeep Kaur renders the song with ease, but I can say that it is the first time I’ve heard her sound so dull and melancholic; she could’ve put in more expression instead of just singing the song! She always sounds so beautiful! Shabab, as I said has almost nothing to do except yell (yes, I do mean yell) “aaaja maaaahiii” behind whatever Harshdeep is singing. Sameer’s lyrics are clichéd to the core, as always. A middling start to the album. Good tune and arrangements, but boring execution.

(Nothing to showcase; what a belch-like song)

The next song takes the form of a hard-hitting rock song which fails to impress except in the rock itself. Neeraj’s composition sounds very rash and all over the place. We know rock can sound very orderly if done well, but sadly, this one is not that. The mukhda seems detached from the hookline, which in turn seems a separate entity in itself. The lines don’t flow into one another as they should in any good song. The hookline sounds like a tune made by a debutant composer. (Well, technically Neeraj can be regarded as one, but he’s been around in Bollywood for so long so as to judge what works and what doesn’t!) The singer (debutant Nikhil Uzgare) belts out the hookline convincingly as a rock singer, but his voice lacks the connect that voices like Suraj Jagan and the like have. The arrangements are impressive, with the rock hitting the right notes. Rock guitars have been played impressively, as are the drums. Sameer’s lyrics are good, but get lost somewhere in the noisy singing and weird tune. Only the rock rocks, and that doesn’t help when the tune is bad!

Now we are treated with another dulcet melody, this time a male-sung song, which is a lullaby. The song immediately reminded me of ‘Masoom Sa’ (Madaari; 2016), another song from father to child. This time too, Neeraj gets it right as far as the composition is concerned. The composition has all that it needs to succeed as a lullaby, and especially the “Main gaaun loriyaan” hook is impressive. The antaras are also impressive, and the tune treads over the low octaves so wonderfully, that it gives a really fascinating touch to the low notes. The man rendering these notes is responsible too for that though. Papon, fresh from the success of ‘Labon Ka Karobaar’ (Befikre; 2016) sings this song in his metallic voice so splendidly that it just touches your heart directly. His voice has the glint of magnetism that makes sure your audience falls asleep, but doesn’t, while you sing a lullaby (if you get what that means!) Arrangements are tranquil, with guitars racing ahead of everything else and making sure things are in right place. Strings help to infuse that orchestral quality into the song, while shakers sound marvellous, shaking subtly in the background. The piano notes that you can hear if you listen carefully, are BEAUTIFUL! The only wrong thing I can point out in this song is its duration; it gets quite testing to sit and hear an almost seven-minute-long lullaby! But that’s not a creative fault. Sameer’s lyrics are just marvellous here, suitable for a lullaby and very moving. A well-done lullaby, with a lilting touch.

(Nothing to showcase here!)

The last song comes and you are sure that Neeraj has played ‘Alternate the Genres’ in this album. First a romantic song, then a loud rock song, then a lullaby, and finally, a loud Punjabi party song. This song literally follows the Punjabi alcohol party template to the tee. The mukhda starts the song off as frivolously as possible, but by the time the hookline arrives, you start getting used to the song. It sounds like those Punjabi songs everyone in Bollywood used to make during the 2007-2010 period. The antara actually has a good tune, by which I mean enjoyable. There are two antaras, one sung by Kaur B, and the other by Master Saleem. That brings us to the vocals. Three vocalists in a song that Neeraj himself could have very well sung himself seems quite preposterous. Okay, at least Master Saleem was a good choice. But Earl Edgar’s portions seem too forced to believe. His rap is believable, but the parts he tries singing sound bad! Kaur B gives us a good break from Neha Kakkar with her unique voice. Arrangements are typical club song arrangements, with heavy techno sounds and the Punjabi instruments pitching in to do all they can to help increase the loudness. The tumbi stands out here too, but then again, give me a song where it doesn’t. The dhols are very pompous, and contribute to the noise pollution. In all this, I feel the song hasn’t been recorded properly, as there’s a harshness to every singer’s voice. Sameer’s lyrics don’t go beyond the usual ‘Let’s drink till our liver breaks down’ stuff we hear everyday in Bollywood. (Am I overdoing it? Because nowadays we don’t hear that stuff everyday! Maybe that era has passed!! If so, I’m happy! :P) A Punjabi song that is enjoyable, but with every enjoyability in life, you get unwanted problems. 😉

Irada turned out to be not as inspiring as its name. Neeraj Shridhar could’ve made a spectacular soundtrack! But sadly, the songs don’t live up to the mark. Two of the songs fare quite good, the other two are weak. Overall, the album isn’t one which you would be listening even one month down the line.

Which is your favourite song from Irada? Please vote for it below! Thanks! 🙂