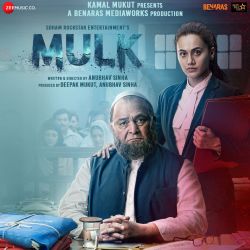 Listen to the songs: Saavn | Gaana

Mulk is a Bollywood socio-religious drama, starring Rishi Kapoor, Taapsee Pannu, Prateik Babbar, Ashutosh Rana and Kumud Mishra. The film, directed by Anubhav Sinha and produced by Deepak Mukut, opened to rave reviews because of its bold content and it’s hard hitting message. Now, such movies aren’t expected to have a music album, but ‘Mulk’ makes sure it has three songs, an apt number of songs in such a film. The music is composed by Background music artist Prasad Sashte, while a guest composition is by Anurag Saikia, who is fresh from the success of his songs from ‘Karwaan’. So let’s see how the songs go with the theme of the film! 😊

Prasad Sashte opens the album with an upbeat celebratory number Thenge Se, which, in its opening beats itself, maintains that it is a song meant to groove to. The opening lines of the composition cleverly hark back to ‘Kajra Mohabbat Wala’ (Kismet), and the feel of the song is more or less the same happy-go-lucky feel that that song carries. Prasad employs three singers to sing three different stanzas with the same tune; the three-mukhda structure, however, doesn’t bore, because all three singers do their best, while Tapas Roy’s string instruments do their part in making the song entertaining at every step. Sunidhi Chauhan opens the song with a boom, while Suvarna Tiwari, fresh from the success of her song ‘Prabhu Ji’ (High Jack), which was coincidentally sung for the guest composer of this album, Anurag Saikia, brings in a rustic and earthy feel, and Swanand Kirkire does the same. Meanwhole, Amit Padhye’s harmonium and Shadab Mohammed’s dholaks engage the listener. Shakeel Azmi’s lyrics are fun and go well with the upbeat theme of the song.

Prasad’s second song Khudara starts with Islamic chants that tell you that it would be a very pensive and sombre melody. As soon as Vishal Dadlani starts singing, your doubts are cleared: the song turns out to be a heart wrenching sad song, which reaches its peak in the hookline, a soaring high-pitched portion rendered perfectly by Dadlani. Mithun Mohan, Ashwin, Anirudh, Himanshu, Tushar & Prasad do well in the backing chants — it really does its bit to increase the song’s appealing nature. The arrangements are mainly soft rock arrangements where the guitars are the only notable instruments; the rest relies on Dadlani’s captivating vocals. Shakeel Azmi’s lyrics are as heart-rending as the composition that Sashte has spun. However, at two antaras, the song seems extra long; it could’ve been kept at one.

The guest composer Anurag Saikia pitches in for the last song, and it is always a delight to read his name on the credits of any album; and it is commendable that he has reached this stage after doing just three songs in two albums before this! Piya Samaye is a proper Qawwali, something we haven’t got to hear in Bollywood for quite a long time. Or especially not one that has been done so tastefully. Arshad Hussain and Shafqat Amanat Ali complement each other beautifully, and Anurag’s composition suits the theme of the film so well, as do Shakeel Azmi’s lyrics based on secularism. The tablas, dholaks, harmoniums that are expected in a Qawwali, are amazing, but here Saikia also adds a wonderful bass, which, if you can catch it, mesmerizes you. And the strings conducted by Jitendra Javda are just mind blowing. All in all, this song is the perfect grand finale for a short and beautiful album like this!!

Mulk was not really expected to have songs, and since it does, I never expected them to be such gems, to be honest! I just can’t express how happy I am that Mulk is one such album that I will never forget, both because of its wonderful music and its meaningful lyrics!

Which is your favourite song from Mulk? Please vote for it below! Thanks! 🙂