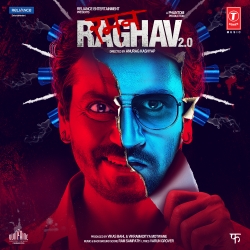 Raman Raghav 2.0 is an upcoming Bollywood psychological thriller, starring Nawazuddin Siddiqui in the titular role of Raman Raghav (Psycho Raman), and Vicky Kaushal as a cop. The film has been directed by Anurag Kashyap, abd produced by him along with Vikas Bahl, Vikramaditya Motwane and Madhu Mantena. The movie is based on the life of the notorious serial killer, Raman Raghav (1929-1995) who operated in Mumbai during the late 60s. However, Kashyap says it is not a biopic and the character that Nawazuddin plays is merely inspired by the life of Raman Raghav. 🙂 All that being said, let’s veer over to the music department. The music has been given by Ram Sampath, who left us with a great soundtrack to ‘Bangistan’ last year and a below average single song in ‘Tere Bin Laden Dead Or Alive’ earlier this year. It isn’t his first time composing for a thriller — ‘Talaash’ was one of his bests — so I expect something great from him here as well. He has given us four songs, with one version = five tracks. I hope all five stand out as great ones individually! Let’s see how “deadly” an album Ram has offered!!

A Ram Sampath album without his wife, Sona Mohapatra singing a song, is like the world without water. Indeed, Ram gives the very first song of the album to his wife, to sing with her amazingly addictive voice, that we mostly get to hear only in his albums, unfortunately. The song traverses the club genre, with foot-tapping EDM, dubstep and trance. Ram’s composition is very ghazal-like, and instantly strikes a chord with the everyday Bollywood listener as well as listeners who are up for something more unconventional. Ram has wonderfully blended the two genres together to produce a trippy song. The hookline is so addictive, you can’t get it our of your head once you hear it. Ram really knows how to gain the attention of his listeners. And he’s really good at it. The second antara takes an unexpected turn to the lower octave, and Sona singing in that low pitch just wins over your heart. Her high pitched portions are amazing as well! It’s a shame we don’t get to hear her more often! The composition, with three short antaras, doesn’t leave your attention wandering while it plays, and that’s the magic. Sona sings the song with a very sensuous tone, that really makes you fall in love with her voice yet again. Her co-singer, Yash Divecha, who has also done the additional arrangements, gets a very little part after the hookline, which is really cool, though. The way he sings that “Qatl-e qatl-e” is so dark, grungy and cool! A small part, but provijes the necessary darkness to the song. Varun Grover’s lyrics are great with very ghazal-like words, the essence of which can truly be enjoyed in the “unplugged” version of the song. In this version, Sona shines like never before. It reminds one of ‘Dil Aaj Kal (Unplugged)’ (Purani Jeans) which also had been sung by Sona. The guitars here are much better than the EDM in the original version (which were great, too!) The arrangements in this version suit the theme, lyrics and Sona’s voice way much more than those of the club version did! Guitars by Pawan Rasailly steal the limelight from Sona in this one, but Sona does her best nonetheless. Interludes are blissful, with the guitar showing off to the fullest. While the EDM/club freaks will enjoy the first version, the music lover will enjoy the second. The composition is beautiful, and so, for me, sounds beautiful in both versions!! Both versions are a #5StarHotelSong!!

The next song on the album takes us back to Ram’s ‘Talaash’ days, the jazz, the sinister music and the unconventional female vocals, not sweet at all, but mischievous. Nayantara Bhatkal, who was all sugar in her last song ‘Main Jo’ (NH10), gets into the salt and pepper mode for this song, and gives a very impressive rendition, suitable for the 60s jazz theme that Ram has given to the song. The composition is really addictive, yet again, and something that will grow on you. The slow and sultry tune really works wonders for the song. The hookline is very catchy, with the line “Tu saccha behooda” or “Tu aisa behooda” repeating, and the singer singing various other lines in between the lines that repeat. I always love when that style is used in songs. It sounds so impressive. Backing vocalists are barely heard, because all the voices sounded quite the same to me! However, that repeating “ooh ooh ooh ohh ohho” is mindblowingly attractive! Ram wins with the arrangements, as well. Jazz guitars, strings make it a melodious listen, and drums provide an engaging beat to sway to. A sound like a xylophone impressed as well. Nayantara’s rendition, as I said before, is really impressive. It reminded me of Suman Shridhar’s rendition of ‘Muskaanein Jhoothi Hain’ from Ram’s album to ‘Talaash’. Varun Grover has written lyrics that suit the theme, with a girl describing Raman’s character in the wildest ways possible. It is fun to hear and entertaining as well as sinister at the same time! Ram takes jazz to a new level, with a sinister take on it. Nayantara’s husky voice helps the song to sound very addictive, and Grover writes clever lyrics! Ram teachers the right way to do a evil character-based theme song. Not like ‘Veerappan’! #5StarHotelSong!!

The next song is a calm, thoughtful number. A surprise in an album to the psychological thriller, this one has been soulfully composed by Ram and just as beautifully sung by Siddharth, accompanied by Ram. Ram’s composition is pleasant and soulful, but not appealing at all. It is slow, and slow doesn’t really strike a chord with the listeners always, unless arrangements help it there. The tune has a number of twists and turns, that are pretty hard to digest, and it gets boring after about half is over. The arrangements start off with acoustic guitar and slow strings for the first half, and slowly breaks into soft rock with electric guitar and drums, but again, it sounds so typical and heard-before, that it fails to make any impact. Siddharth sounds a lot like Benny Dayal with a more grungy side to his voice. I feel Benny with his soft and smooth voice would’ve done this song better than Siddharth. Not that Siddharth hasn’t done a bad job. Ram accompanies him very well. Varun writes perfect lyrics with a dominant touch of demotivation and melancholia. I really don’t have much more to write about this one. It is pleasant, but too heavy for the ears, somehow. 😦

The last song of the album is a theme song, with a pulsating electronic beat to it. Ram has come up with a gripping theme to the film, but the problem is that it is so passive and uneventful! Nothing big happens in it, and it just seems like the same techno beats are being repeated over and over again, and for five minutes! I think this might be used during some chase scene, or critical scene in the film, and the whole track is the BGM for that particular scene. That explains the length. The album could’ve done with just a glimpse of this, though. Two minutes would’ve been just fine. The only attraction besides the beats, is the barely audible sarangi in the background. It is too muffled, though. A gripping theme song, perfect for the screen, but not suitable as something to put in an album. A bit more variation was welcome… With this, I just felt like I played some video game!

Raman Raghav 2.0 doesnt quite meet up to my expectations. One of my expectations was met, though. That was the expectation that Ram would show us a different side of his music, and he did, with an impressive cocktail of slow, melodious and gripping, sinister songs. However, he didn’t quite impress as much as I wanted him to. The first two songs, and the unplugged version of ‘Qatl-e-Aam’ were impressive. The remaining two didn’t quite gain my attention. Nevertheless, infusing melody into an album which didn’t require music, let alone melody, was a very impressive and commendable job he did! Though Ram could’ve done better, he has definitely shown us a glimpse of Ram Sampath 2.0 with this album!!

Which is your favourite song from Raman Raghav 2.0? Please vote for it below! Thanks! 🙂