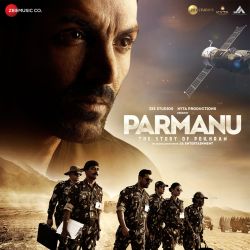 Parmanu is a Bollywood drama/thriller film starring John Abraham, Boman Irani and Diana Penty, directed by Abhishek Sharma and produced by Zee Studios, JA Entertainment and Kyta Productions. The film revolves around the 1998 bomb test explosions conducted by the Indian Army at Pokhran, Rajasthan under the leadership of Dr. APJ Abdul Kalam during PM Atal Bihari Vajpayee’s tenure. The film has opened to mixed reviews, but what had me most excited about the film (since the subject matter isn’t really the kind I like) was the music by Sachin-Jigar. Well, Sachin-Jigar and Jeet Gannguli, as I learned after the album released.

Sachin-Jigar April start the album off with a refreshing song Shubh Din, which follows the folksy Gujarati/Rajasthani template to the tee, but still manages to turn out as an entertaining number. They recreate their own ‘Aavi Re Hoon Aavi Re’ (from the Gujarati movie Carry On Kesar), and the song has a catchy instrumental loop after the hookline, which Sachin-Jigar have made sure, hooks the audience. The arrangements give the impression that the makers were going for something grander, but had to settle for less than what they intended. The folksiness doesn’t come out full-fledgedly as one would expect from Sachin-Jigar, but ends up sounding muffled. The vocals by Keerthi Sagathia and Jyotica Tangri are amazing though, as is Sachin-Jigar’s composition, so at least the song is entertaining for as long as it plays.
The next folksy number by Sachin-Jigar, Thare Vaaste, is like a patriotic recreation of their song ‘Chunar’ (ABCD 2), especially lyrically. Vayu Srivastava’s lyrics are aptly poignant and patriotic, but sadly, the composers’ tune doesn’t match up to that level; it fails to move the listener. The anthemic tune gets repetitive after some time, and though Divya Kumar does well in trying to make the song sound energetic, it is again the fault of the muffled-sounding arrangements, that the song doesn’t come to life as would be expected.
Kasumbi, the best song of the album, also sees the duo follow the folksy template, but this time Vayu’s lyrics are Punjabi, in a film set in Rajasthan. This one starts off like another ‘Chunar’ spawn, but soon sets in as a moving patriotic number — the shehnaai is the most remarkable instrument used here; it harks back to the old patriotic songs. Again, the arrangements sound muffled here too (what’s with the poor programming throughout the album?) but Sachin-Jigar’s tune is so strong, it can be overlooked. Also, Divya Kumar gives an amazing performance, especially in that gem of a hookline. Vayu’s lyrics are beautiful, incorporating the word ‘Kasumbi’, which is probably the name for the saffron colour associated with patriotism in Gujarat and Rajasthan.
The last two songs composed by Sachin-Jigar in this album, have soothing tunes and less of a folksy impact than the previous songs. Sapna is the trademark Sachin-Jigar romantic melody (a la ‘Meet’ from ‘Simran’) in its composition, but the lyrics by Sachin Sanghvi are not romantic at all. Overall it is a pleasant listen, which Sachin-Jigar doing their signature method of repeating an instrumental loop after the hookline. (The loop in this song sounds a lot like the one in ‘Maana Ke Hum Yaar Nahin’ from “Meri Pyaari Bindu”). Arijit Singh is himself in the song, and carries it off like he carries off every song he’s ever carried off. The guitars are enjoyable and soothing, and the sarangi is beautiful, and the song itself is fortunately short — any longer and it would’ve been too long.
The last song by Sachin-Jigar, De De Jagah, is yet another in the same vein as ‘Sapna’, but this time, the lyricist (poet and politician Dr. Kumar Vishwas) complements it with romantic lyrics. What strikes me right away, yet again, is that something is wrong with the mixing, making Yasser Desai’s voice sound like it has been recorded on WhatsApp. Sachin-Jigar’s vibrant composition is one of the best of theirs over the period of 2016-2018, and Yasser Desai, barring the bad use of his vocals, tries to do his best, and succeeds fairly enough. The guitars and tablas complement each other surprisingly well, and the harmonium provides the soul in the song. The tune of the hookline is what will get you hooked to this song, just like songs traditionally are supposed to do.
Now, the reason I described that as Sachin-Jigar’s last song, is because there’s a kind of guest composer we have in the album; he has been waiting patiently for his turn, and I’m more than happy to talk about his song. The man in question in Jeet Gannguli, who has somehow bagged a romantic (read Mohit Suri-like sob-inducing) song in a movie like this. Jitni Dafa is one of those songs we have heard enough of in Bollywood, and I can’t believe the makers would proactively damage their own music album by including such a song in the album. It starts off painfully simple, and until those ‘Aashiqui 2’-ish beats start, it isn’t that painful, but when they do start, you keep waiting for the song to end. Rashmi-Virag write great lyrics, but hey, I’m quite sure John’s character in the film has time to weep like this at such a critical time and dire situation. And the singer is Yasser Desai, trying his best to be a mix of Mustafa Zahid, Arijit Singh, Saim Bhatt and Atif Aslam.

Parmanu has a soundtrack that mostly sticks to the point (barring that guest song) but something is definitely wrong with the arrangements; if they had been better mixed and mastered, the sound would’ve been grander and more enjoyable!

Which is your favourite song from Parmanu? Please vote for it below! Thanks! 🙂