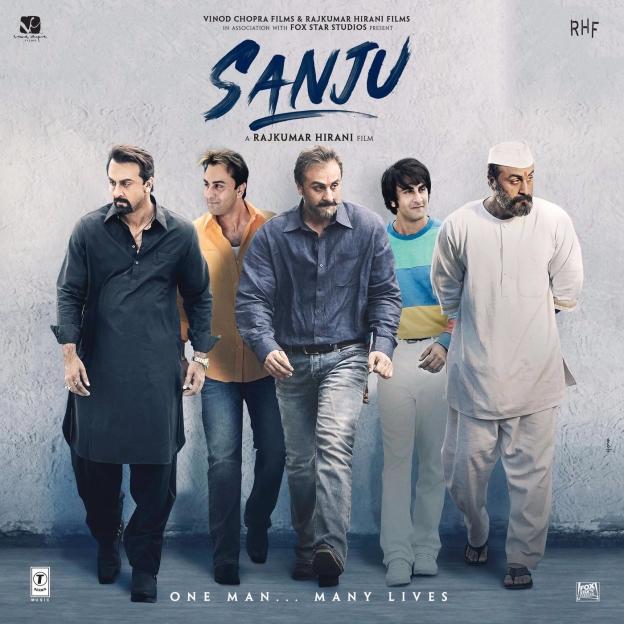 Sanju is a Bollywood biopic starring Ranbir Kapoor, Paresh Rawal, Manisha Koirala, Dia Mirza, Vicky Kaushal, Sonam Kapoor, Karishma Tanna, Jim Sarbh and Anushka Sharma among others. The film is directed by Rajkumar Hirani, and produced by him along with Vidhu Vinod Chopra. We all know how Sanjay Dutt features in almost all of Hirani’s films, save ‘3 Idiots’. However, Hirani says he never got to know him personally until one day he started talking about all his hardships during an emotional breakdown. That lit a lamp in Hirani’s mind, and he decided to make a biopic. Now, I can’t comment on the movie as I haven’t watched it yet, but I can sure do a music review, right? 🤣 The music of the film has been composed by three composer entities (one being a duo), Rohan-Rohan, Vikram Montrose and A.R. Rahman. It’s surprising to see Rahman first of all in a multicomposer album, because whenever he did those in the past, it was because he left midway due to other commitments. But here, he was the last addition reportedly! Rohan-Rohan have two songs, and it isn’t their Hindi debut; that happened four years ago with ‘Mumbai Delhi Mumbai’, but it is Vikram’s Hindi film debut — he has done some Hindi pop songs and a Marathi album called ‘Bhay’, which was mediocre. Also, I’ve noticed that Hirani uses music as a prop to take the story forward, but not even in the way other filmmakers do (they’ll have a song play in the background and all). No, Hirani will have a full-fledged four-minute song sequence, but it’ll make the moment fun and enjoyable. However, the music itself isn’t always up to the mark. His favourite film album of mine is ‘Pk’, because the music actually was good there. Let’s check out how the music is with ‘Sanju’, though you might already know by my review’s headline. Sorry. I’m dimwitted that way.

Rohan-Rohan are the ‘chosen ones’ who get to begin this album. And they do it in quite a quirky manner too! Main Badhiya Tu Bhi Badhiya is a song that is supposed to be an old song that the character are singing in the 80s, so the song is composed like a 50s nok-jhhok number. It starts with a wonderful opening prelude, which instantly sucks you into the 50s. Sunidhi’s voice modulation is fantastic, and is obviously one of the best vocal renditions of the year. Sonu Nigam, in comparison seems weak, but I wonder, since he can mimic so well, why didn’t he sing in a nasal tone, as well? He still has sung in one, but it could’ve been more pronounced I feel. Rohan-Rohan’s composition is fun, but takes some time getting used to. And Puneet Sharma’s lyrics are very quirky and funny, especially the part when they talk about ‘family planning’ or rather, the lack of it. The song somewhat addresses Sanjay Duty’s commitment issues, and it’s the typical Hirani way of presenting a serious topic in such a flippant and casual way.

Rohan-Rohan’s second song doesn’t fare too well. Bhopu Baj Raha Hain tries to start with a retro sound as well, trumpets blaring, bhopus belting out weird noises, but it soon transcends into a very weird zone. Nakash Aziz was the obvious choice for the song, and I must say Rohan-Rohan’s arrangements are enjoyable, but I’m sure nobody will listen to this song again. There’s not magnetism or attractiveness to it. The antaras are poorly structured, and I’d never expect this song to be in any big commercial film. The worst part is that this is a Hirani film. Though the duo has tried to create the Hirani zone in this song as well, I feel it could’ve been less effervescent. The lyrics by Rohan Gokhale and Shekhar Astitwa are just a bunch of words you never think much about.

Vikram Montrose, the debutant, also starts off his share of the album with a song that everyone would love because of the motivational touch, the powerful vocals and the inspirational lyrics. Kar Har Maidaan Fateh does carry thag irresistibly moving sound, I agree. The choice of Sukhwinder Singh wasn’t surprising, but the choice of Shreya Ghoshal was surprising, and the way she sings is even more surprising — she sings quite lower than she usually sings. She shines even then, though. Sukhwinder Singh’s parts sound almost heard-before and nothing new, but because of the freshness Shreya brings through her low pitch, the song reaches different levels of awesomeness. Vikram arranges is quite standardly, with rock guitars, percussions, and drums. However, the violin playing the hookline in the interludes, is amazing. Also, the composition took some time to grow on me, but when it did, I couldn’t get it out of my head. All in all, it was a good debut for Montrose.

His second song Baba Bolta Hain Bas Ho Gaya, is hinged on the quirky lyrics by Puneet Sharma and Rohan Gokhale. Papon brings a different, rough texture to his otherwise smooth voice, but I enjoyed Ranbir’s parts more. And Supriya Pathak (not the one you’re thinking of) sings her lines quite funnily. The groove and gun sounds throughout the song have been overused so many times in so many gangster movies in Bollywood, that it sounds boring here. The song is also unbearably long, at just under than 5 minutes. However, I’m sure this song is for the theatres.

And then enters A.R. Rahman, who gets two songs too. Ruby Ruby starts with that irresistible bass line, followed by the wonderful guitars (Keba Jeremiah) and a grungy voice keeps whispering “Rrrrrubyy”. When the actual melody starts, you are initially confused, and the song takes some listens to get used to, but since it depicts Dutt’s drug addiction phase, I think it’s deliberately composed like that — so many lines repeating so many times; there’s actually three discernible different parts in the song that keep repeating over and over. And it sends us into a trance. The percussions are amazing too, as are the strings! Shashwat Singh masters the grunge very well, and I especially loved the part when he does the descension from ‘Tu bhi, ruby, ruby…’. Poorvi Koutish is a capable backing vocalists, and her ‘la la la’ is so haunting, it sucks you in.

Speaking of haunting, Rahman’s next song Mujhe Chaand Pe Le Chalo is just that. A sensuous composition, rendered just perfectly by Nikhita Gandhi, the song immediately has you hooked. It has a number of lines ending with high notes, which Nikhita holds so wonderfully. The rhythm Rahman employs in the background is intriguing, and reminds you of ‘Muskaanein Jhoothi Hai’ from ‘Talaash’ with the shakers, the subtle percussion, and very muffled strings that give the song an even more sensuous atmosphere. Irshad Kamil writes lyrics that suit the ambience of the song, and I feel that the song itself can transport you to the moon. Also, Nikhita hums so brilliantly at the end of the song. 😍

Sanju turns out to be the weakest Hirani album for me, due to the meaningless quirks from the newer songs by the younger composers, that just brings the album down. The music field has sadly not been conquered by Hirani this time.

Which is your favourite song from Sanju? Please vote for it below! Thanks! 🙂