To hear the full songs on Saavn CLICK HERE 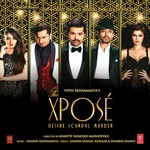 The Xposé is an upcoming Bollywood musical thriller film starring Himesh Reshammiya. Sonali Raut and Zoya Afroz play supporting roles in the film with Yo Yo Honey Singh in a negative cameo, and Irrfan Khan in a special appearance. The film is directed by Ananth Mahadevan and being produced by Vipin Reshammiya, who is Himesh Reshammiya’s father. The film is set in the 60’s and revolves around a murder which the character played by Himesh, Detective Ravi Kumar, is inspecting. This is Himesh’s first film as a music director after the not-so-good Policegiri and Shortcut Romeo last year, which did not have many memorable songs. This album has 18 songs, with only 6 originals, 2 reprises, one theme, one mashup, and the remaining 8 remixes! So is Himesh Reshammiya, the nasal king, back with a bang with the music of The Xposé? Let’s see! Read on to find out!

The first song of this album, ‘Ice Cream’ will instantly remind you of the R.D. Burman days. From the trumpets to the “Haw Haw”, everything in this song will remind you of R.D. Burman’s era. The rap at the starting and interlude by Honey Singh sounds weird in this song, but I guess he has to have some rap if he is acting in the movie! When Himesh starts singing the names of various girls, you will get to know that it is another one of the songs which fall under the category of great music, but very bad lyrics, which are by Shabbir Ahmed, who should retire now, seriously! Palak’s vocals have improved a lot in this song, maybe because we have never got to hear her in this type of retro song, but still you will feel that Shreya Ghoshal would have been a better choice. The antara’s tune is ten times better than the mukhda. The percussion (bongo-congo I guess) is done brilliantly, but of course not as great as Pancham da! Himesh had tried this type of a song recently in ‘Khiladi 786’ also (‘Balma’) but that was a class apart from this one because of Shreya’s vocals. This song has the capability of becoming a super-hit, like all other songs which become that because of their nonsensical lyrics! Try it to get yourself reminded of Panchamda’s era by the music. Ignore the lyrics.

From Mohammed Irfan’s vocals, to the tune of this song, to the lyrics, everything about this song is soulful. It’s a sad, slow-paced, romantic song about judaai or bichhadna. Though one line in the mukhda resembles the hit song ‘Tum Hi Ho’, that can easily be forgiven by listeners when they hear the whole song. The antara is as new and original as blank paper (I know it’s a weird comparison but I couldn’t think of anything else! :-D). The violins and piano are used brilliantly by Himeshji. The vocals of Mohammed Irfan, whose recent song ‘Baarish’ from ‘Yaariyan’ was very well-received by listeners, are very smooth and soothing. I personally liked the way he pronounces his “J’s”, very softly, so it sounds like “Zh”. The lyrics are also too great! With very less instrumentation, Mohammed Irfan’s voice stands out prominently and it sounds great! Now, for the reprise version. Well, the less said about it is better, because the exceptional talent of a great rising singer of our country, Neeti Mohan, has been wasted very badly in this song. Her parts are in English with one line of Hindi in between. Throughout the Reprise song, she keeps saying “Ex-P-Oh-Ess-Ee Exposay” which sounds very annoying. And don’t even ask me about the techno sounds! Mohammed Irfan’s part is taken as it is from the original and remixed ( It does sound like one too.

) The Original Version is a Must-Listen and also a #5StarHotelSong but steer clear of the Reprise Version! You won’t miss anything much!

When you see the name, you will think it is a remake of the old song from ‘Solva Saal’. Well, I can’t actually call it a remake, but the music does remind you of that era when S.D. Burman used to rule the music industry. Yo Yo Honey Singh starts with some lines which sound great and repeat throughout the song. Himesh’s vocals sound great in this song. The instruments and various sounds used in the song also make it what it is. Right from the whistling, to the way the drums are played, you will be reminded of S.D. Burman’s music. The mukhda and antaras are both brilliantly composed. Nothing much more to say except, do try it! You will not regret hearing it!

It starts with Neeti Mohan’s vocals which are not supported by any music. After hearing those, I regret saying that Himesh wasted her talent in ‘Dard Dilo Ke (Reprise)’ because he has used her vocals beautifully in this song. Mika’s vocals sound a bit annoying in this song except for a solo bit which he has in the middle which goes like “Tere Naina Di…”. Mohit’s vocals are never heard on their own and are merged together with Himesh’s own vocals in all the lines which he has sung. All of their lines are like that in the song. However, the remaining two female singers, Shubhangi and Shalmali, cannot be heard at all in all the noise. This song is perfect considering the theme of the movie and it can be called the title song of this movie. The only thing which I didn’t like is the choice of so many singers. But the song suits in this movie and gives a feeling of thrill with a rock elements. A good attempt but not as good as the other songs in this album. Still, try it once!

When it starts, you will feel like you are hearing a Western classical composition. Yes, it is that classy! The violins, flute, and piano help in making it very enjoyable to listen. Even Himesh’s nasal voice which is annoying to some, can be forgiven because of the excellent music. It’s another romantic song which is very soulful. The use of guitar in one of the interludes, along with violin, is great! Shalmali’s vocals are awesome as always. She has used a voice, very different from what she has used in previous songs. After ‘Pareshaan’ from ‘Ishaqzaade’, it is her first out-ant-out romantic song. Honey Singh’s little rap sounds very cute (I never thought I would say this, but here it is!) and suits him. The lyrics by Sameer are also very romantic. Thumbs-up for this composition! A very classy composition by HR who used to give such great music only in the past, five or six years ago. Must-listen!

At the starting of this song, you will think it’s a Western-style slow rock song, but when you least expect, the music completely shifts from Western-style to an Indian classical-type melody. It sounds like a Ghazal, and its like a poem, which you can read without a tune, though the tune of this song is too great to praise! The voice of Ankit Tiwari is very fresh and perfect for the new-generation listeners. He is working with Himesh for the first time and he makes use of the great opportunity which he got! The mukhda and antaras are both very soulful and soothing. You might miss Arijit Singh in this song for a while, but then you will change your mind. Rekhaji’s version (the Reprise), starts with an Arabic-sounding tune. But then, just like the original, it changes to a ghazal-type melody. I personally liked her version better, because her vocals are perfect for this type of song, and it also reminded me of ‘Phir Le Aaya Dil’ from ‘Barfi!’, not because the tune sounds similar (it doesn’t at all!), but because of Rekhaji‘s singing style, very soulful. Thank God, Himesh Reshammiya didn’t get this song recorded by Tulsi Kumar, the queen of reprises, or we wouldn’t have gotten to hear such a wonderful version of it! The song will not at all bore you, not even for a second. However, It will transport you to a different land altogether, lift up your mood if you are sad, or make you even happier if you are already happy! It is another #5StarHotelSong.

This is a timepass song (if you can call it one), with the same annoying part of Neeti Mohan from ‘Dard Dilo Ke (Reprise)’, but interspersed within her parts, throughout the song are Irrfan Khan’s dialogues, which are just the lyrics of ‘Sheeshe Ka Samundar’. However, his voice sounds creepy and gives the thriller effect to the song. Nothing to hear over here except Irrfan’s dialogues.

Overall:- Those who were saying that Himesh will be back with a bang with The Xposé, have been proved right. The soundtrack is full of great songs with great lyrics (except ‘Ice Cream’ of course) and great melodies/fast-paced tracks. Himesh has certainly performed way better than what he did in ‘Policegiri’ and ‘Shortcut Romeo’ last year. Leaving one annoying reprise (Dard Dilo Ke Reprise), another song which is top-class in music but fails in its lyrics (Ice Cream), and a song which is great but falls down due to the great melodies in this album (Catch Me If You Can), the remaining five songs are very nice, with mind-blowing music and awesome vocals. Those who had huge expectations from this album, are content, and I can say that with this album, Himesh IS back with a bang!

Note:- The letter which is underlined is the final rating