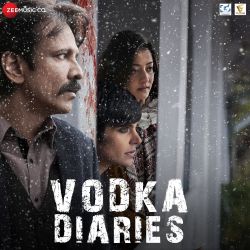 Listen to this album: Saavn

Vodka Diaries is a Bollywood crime thriller starring Kay Kay Menon, Mandira Bedi and Raima Sen in lead roles. The film is directed by and co-produced by Kushal Srivastava. The film’s album comprises music by Harry Anand, Sandesh Shandilya and Parvaaz. While I’m expecting nothing from Harry Anand because of his past works, I’m expecting quite a lot from Shandilya because of his past works. 😅 Parvaaz is a band that is debuting in Bollywood with this film, and hopefully they make a crackling debut!

Lead composer Harry Anand has composed for many an unnoticed (by me) film, and looking back at those songs, I can say I’m happy I didn’t notice them when they released. Here he starts off with a generic and yawn-inducing club song called Angoor, and you know it won’t just be about grapes. The digital sounds have been heard many times before, and the voice of the composer doesn’t help to make the song any better. It is a lame attempt at making a catchy club number about wine. Don’t even ask me about the “Oh Bae Bae Bae Bae Bae Bae-by” loop! He fares better, but only slightly better, in Heeriye, another generic club song, but this time singers like the late Labh Janjua help propel the song. Again, the song is about drinking, but the arrangements are better, if not fresher, than those of ‘Angoor’. Shalmali too, tries to help alleviate the status of the song, but it can only go to a certain extent, until which you are already bored.
Thankfully, Harry Anand doesn’t compose the rest of the songs, and those songs are the best in the album. Bangalore-based Parvaaz Band composes Beparwah, a retro rock song which would make you nostalgic if you listen to the 80s English rock songs. Lead singer Khalid Ahamed has a very distinct voice, which makes the song even more enjoyable, and the constant guitar and drum beats in the background help make the song catchy. A sinister vibe prevails all throughout the song, and it suits the thriller vibe of the movie. Lyrics are good as well.
Sandesh Shandilya, returning after quite some time, gets the best song of the album, Sakhi Ri, a semiclassical melody with Rekha Bhardwaj and Ustad Rashid Khan at their vocal best, crooning a heart-warming melody that is graced with the melodious flute, a regular in Sandesh’s music. The song takes some time to get attuned to at first, but it grows like slow poison. The aalaps by the lead singers are noteworthy, and the beautiful interludes have the best of musical arrangements, like the little digital loop. The strings have been used wonderfully, and the lyrics are also heart-touching. This will surely emerge as one of the best classical songs of the year, but sadly, it went unnoticed.

Half of the album is great and innovative and creative, while the other half is plain generic and boring.

Which is your favourite song fromVodka Diaries? Please vote for it below! Thanks! 🙂